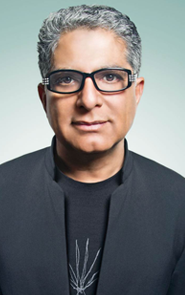 He writes and releases three monster-big books per year.

He blogs and tweets daily, pens articles like a rocket traveling at warp speed, and speaks to millions.

He writes on laptops, in longhand, and through a tape recorder. He’s written several manuscripts on airplanes alone.

At present, he’s working on a book about death, one about growing younger, and a novel.

He meditates twice a day, for an hour a pop, and spends at least an additional hour at the gym. The exercising “refreshes” him. Once every three months, he goes for a week of silence into the wilderness where he talks to no one. Says it keeps the ideas flowing.

Who has this kind of time and discipline?

Believe it or not, that’s nothing compared to prolific superstars like Barbara Cartland, the British historical fiction writer who publishes close to 20 books per year (nearly 300 in total). Or, Mary Faulkner, the South African writer who wrote under six pen names to attain the Guinness Book of World Records ranking of history’s most prolific novelist (with 904 titles. Ouch!).

Forgive me if that sends you diving under your down comforter for the rest of time (or, if you’re like me, head first into a 10-hour garage cleaning binge). That’s not my intention. I’m just trying to get your attention. Because, if you can embrace the visual of a single person cranking out all these volumes, perhaps one little book will seem less daunting.

Anything, broken up into bite-sized pieces is manageable. What’s the saying? A cinch by the inch or hard by the yard. I love that! That’s probably why I’ve been known to crank out books in 8 or 12 weeks—because I break them up into inches. Aside from being a glutton for punishment (apparently), when I’m handed these manic deadlines, I take the project and splice it up into bits, section by section, chapter by chapter, subhead by subhead. No big deal. I don’t consider scaring myself with thoughts like: “Crap! I’ve got to deliver 100,000 words in 60 days with legendary agents and editors and publishers watching my every comma.” I’d be 250 pounds from ingesting the coffee ice-cream needed to squelch that kind of panic. No. I know better. Instead, I think, “Good. I’ve got a WHOLE week to write the first chapter! That gives me time to hit the gym every morning and reward myself with a movie on Friday night!”

Okay, so I might be hideously optimistic, but so far so good. And, while I can’t imagine what Chopra or Cartland or Faulkner’s thoughts were/are at the start of their books (I’m guessing they’d take my pea-brained chapter-a-week schedule and laugh in my face), my level of output serves my overall goals. For yours, one book in your lifetime might be all it takes to eternally satisfy, and I honor that (lucky you!). But, no matter your desired page count, it all starts with your mindset…

Before delving further into this thought, I first want to thank you…

This was a fun week! I’ve loved hearing from so many of you (through the comment buttons below, my email, phone, or social media)—sharing that my Goosebump publishing moments outlined in last week’s blog, however humble, helped give rise to your own juicy visuals. Thank you for taking the time to share the love!

Now, as endorphin-inducing as it may have been last week to mentally romp through those publishing deals, tours, and delusions of media-darlingness, let’s switch gears and see what several writers have to say about what it actually looks like to make this writing business happen, hour upon hour, year after year…

This quote, by Robert McKain is one of my favorites, and it implies choice. YOU CAN CHOOSE to take action instead of waiting around to get hit over the head with inspiration. Sure, watching countless reruns plugged into the boob tube has its allure, but how satisfied will you be if your book never gets out of your head? (Hey, don’t get grumpy with the messenger. You can still stay glued to your top few shows; just be open to the idea of putting yourself on a media diet so you’ve got access to the kind of time and energy it takes to kick start any latent motivation, much less deliver on deadlines, self-imposed or otherwise.)

“I had to let go of the debilitating belief that mere mortals cannot write a book… Once I realized that, nothing could stop me because I believe in my deepest heart that I was put on this earth to tell my stories and entertain readers.” ~Roxanne St. Claire, Thrill Me to Death (and other bestselling novels)

“One of my many college majors was literature, and for several years I doubted I could write a novel because I’d never be Tolstoy. It finally dawned on me that the world already had a Tolstoy, and it didn’t need another one. Which is when I decided to tell my stories my way.” ~ JoAnne Ross, bestselling author of No Safe Place

“If I had thought of it as, ‘Was I qualified?’ instead of honoring the thing that came alive inside me, I would have never done this.” ~Charlene Ann Baumbich, author of Dearest Dorothy

When are you most creative?

Experiment with various schedules. See which hours light you up. What about shifting your sleeping hours so you can get to bed earlier and wake an hour or two before your norm? Try moving morning chores around to complete the night before. Or better yet, delegate chores to family members. Where there’s a will, there’s someone to pawn things off on. Ha! If you’re creative at night, get your must-dos done beforehand. The idea is to increase your writing productivity. Work with what works.

Kelly L. Stone’s book, Time to Write, talks about how it’s imperative to create a schedule for your writing. Experiment with different times of day. Look at this a psychological study on your self. Sit back and observe. Watch your habits, lifestyle, and begin being accountable for your time.

“If you want to be a writer, you must make time to write… and then you must write.” ~Natalie Goldberg, author of Writing Down the Bones

“You sit down. You try to sit down at approximately the same time every day. This is how you train your unconscious to kick in for your creatively. So you sit down at, say, nine every morning, or ten every night. “… Turn on your computer and bring up the right file, and then you stare at it for an hour or so. You begin rocking, just a little at first, and then like a huge autistic child. You look at the ceiling, and over at the clock, yawn, and stare at the paper again. Then, with your fingers posed on the keyboard, you squint at an image that is forming in your mind—a scene, a locale, a character, whatever—and you try to quiet your mind so you can hear what that landscape or character has to say above the other voices in your mind. The other voices are banshees and drunken monkeys. They are the voices of anxiety, judgment, doom, guilt. Also, severe hypochondria…” ~Anne Lamott, bestselling author of Bird by Bird: Some Instructions on Writing and Life

“Procrastination is one of the most common and deadliest of diseases and its toll on success and happiness is heavy.” ~Wayne Dyer, bestselling author of The Shift

Stephen King works on the most important stuff in the morning for three hours, saving stories that may or may not develop for the afternoon. “I don’t take notes; I don’t outline; I don’t do anything like that. I just flail away…” he told author Jill Krementz. “I’m a salami writer. I try to write good salami, but salami is salami. You can’t sell it as caviar.”

Everyone has his or her favorite spot in which to write. Mine is in my massage chair (how hooked up is that?). But, the greatest gift you can give yourself is to get over it. Be flexible. Learn to write anywhere—cafes, parks, your car, the stands at little league (but not when your kid’s out on the field!). I’ve written chapters while waiting for a loved one in ICU, while in a fight with a best friend, at the foot of my mother’s death bed. It’s been my sanity, my distraction, and my labor of love. It’s carried me through everything and then some. At this point, after decades, I joke that I could write at the end of a runway or sitting on the moon (I dare Sir Richard Branson to try me on that one, if he can just figure out how to dial up that Internet connection).

“I have to be alone. A bus is good. Or walking the dog. Brushing my teeth is marvelous—it was especially so for Catch-22. Often when I am very tired… my mind gets very clear…” ~Joseph Heller

Veronica Chambers finds high places to curl up like a cat—“the loft in my apartment, the roof of my brownstone, even the kitchen counter.”

Toni Morrison says: “Writers all devise ways to approach that place where they expect to make the contact, where, they become the conduit, or where they engage in this mysterious process. For me, light is the signal in the transition. It’s not being in the light, it’s being there before it arrives.”

Read part I of The Writing Life here or part III here.