Merry’s Miracle (aka the Universe is Magic) 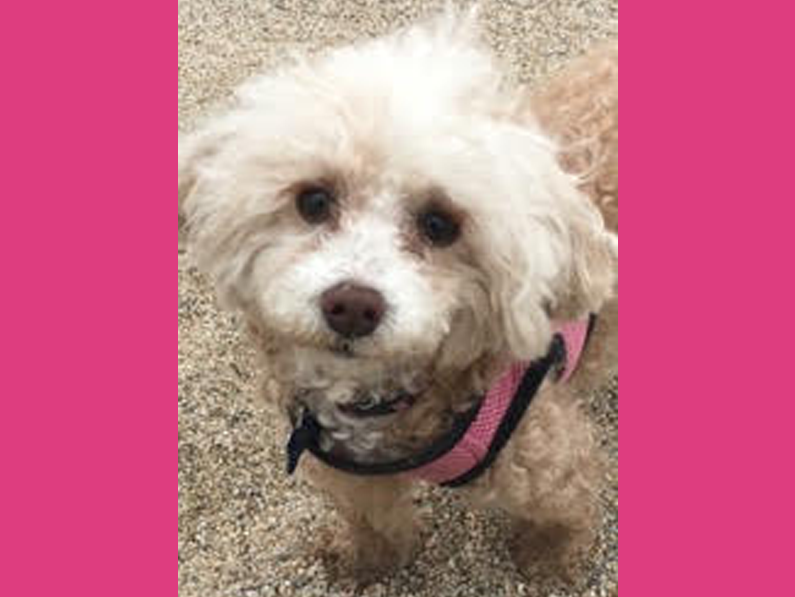 “How can anyone be so cute?” I must have said that to sweet Merry five million times over our eleven years together. I never got over it or used to it—how beautiful and perfect and easy and joyful she was, wherever she was. I’d giggle every time she’d bound through the house to greet anyone—or insist on standing atop the counter (or any raised surface) to sit eye to eye. This 8 lb. gal—who was kept in a cage for the first year of her life in the home of an elderly couple who was freaked out about potty training—had as much or more PRESENCE as my childhood 85 lb. German Shepherd.

It’s a weird thing, being the custodian of a puppy who’s the same size of your infant when he was born. I carried my son, Tosh, around everywhere, for years. (Even while hoofing it with multiple leashes for my dog-walking business. Mama had biceps!) I suppose I could be accused of being a bit of an “over motherer.” Since society frowns on lugging around your big kid, I put Tosh down and eventually picked up the pup. And she deserved every minute of pampering. That fuzzy face dished out nothing but good vibes. (My boy and his “puppers” in Carmel.)

Having always owned Shepherds and labs and big-dog mixes (nothing smaller than a Border Collie), I was certain I could never be a “little dog person.” But, turns out, they’re so portable! Who knew? We could take her everywhere, and did. Horse trips were among her faves—she loved to graze and it never upset her stomach. I always felt so blessed to have her by my side.

I carried Merry on my hip like she was a toddler. Even while roller skating—dang no photo evidence of that one, although neighbors often came outside to watch in amazement as she sat totally still rolling down the street. Anyone could carry this “walking stuffed animal.” Her chill energy was instant peace. People would come to my Carmel writing retreats and say, “I don’t usually like little dogs, but she’s so different. I want a Merry!” One retreater, a medical doctor, was so taken with her that she went online, found toy poodle puppies that happened to be ready for adoption near the San Jose airport (where she was flying out of the next day), and scooped one up. Her husband was shocked to find that his wife had come home from California with more than writing treasures in her bag! (FYI, there’s also a great poodle rescue in that area.)

It’s been three weeks since Merry passed (from a burst gallbladder—no idea why). We were together that morning, sleeping on the family room floor days after her surgery and a long night. I woke up to her heavy breathing and knew to put my hands on her belly and hold loving space until she took her last breaths. Just as I’d done with my mother in 1996, it was all very peaceful and beautiful and a great honor.

And so, so, effing hard. I still keep reliving it, with gratitude and disbelief and shock. She was only twelve and I was nowhere near prepared.

They say it gets harder before it gets easier, and it has. My family raced over that day within minutes. Larry was devastated and canceled his day of meetings to come right home from work. The kids—Tosh, Hayli, and her hubby, Rick—made it to the house in record time. My sister was at our door seemingly instantly. Our two German Shorthairs, who’d been asleep in our bedroom, held vigil next to her body. Our family worshipped this dog, so everyone was a wreck. Not being present to say goodbye hit them hard. Since Merry had been sick for a week and I’d been there every step and done all I could, I felt peaceful. Able to console others. Even the vets, who cried when I called. Sister Carol and The Fuzz always had the best chats. My friends brought flowers. Larry’s friends brought food and more flowers. (Grown men! A tiny dog! Tears! It’s safe to say I love them so much more now.) We’d all been together a lot over the holidays and, now here we were, again, unable to go back into the world.

I think we experienced a kind of high being together. That’s what happens when something sad hits—people rally if you’re lucky. I felt lucky. That much love—given and received—feels miraculous.

Merry was a miracle. Speaking of miracles, I want to share one that happened after she passed. I think it’s a stunning reminder to remember how magical life is. It’s too easy to forget that these days.

I’m still too raw to write the bigger story of this perfect pup (the insane synchroncities and signs about how she came to us…) and don’t know that I ever will. It’s so big and mystical and otherworldly and totally unbelievable, even to friends who write about the mystical and the totally unbelievable. Maybe one day I’ll get it down. For now, check out the sign she sent me during our last minutes together. I can’t even.

Scene: Our driveway. After a lot of gathering around and processing and memories shared, it was time to take Merry to the vet for cremation. (I would have buried her beneath the grass under our oaks—seeing as how it had finally just rained and was a brilliant green—but then I’d never feel free to move.) I placed her in a beautiful velvet box and blanket and transferred everything carefully into Larry’s car. (Just that prior weekend, I’d teased Lare about always listening to “oldies.” “I love so much of the music from the sixties and seventies, too, babe,” I whined. “But jeez. I was sick of some of those songs IN the sixties and seventies, and now I’m REALLY sick of them!” He laughed and changed the station to KISS FM, where Portugal.The Man’s “Feel It Still” rocked our speakers. Phew.)

Before I go on, I should add that Merry always loved to go “The Bye Bye,” as Larry coined it. He’d stand in the kitchen and sing: “Merrrrrrrry? Want to go THE BYE BYE?” and she’d come running. She lived to go for Daddy/Daughter trips to Home Depot, just the two of them. Imagine, my 6’4” ex-football player carrying a poodle with a pink collar in his arms. The only way I could get her excited about going into the car without Daddy was to say, “Wanna go The Bye Bye to CARMEL?” She understood Carmel meant lots of snuggles—with women who might perhaps drop bacon. I swear she knew her job was Chief Muse and Space Holder, and took that position very seriously. Then she’d break out and celebrate Thursday mornings in Point Lobos or Monastery Beach where she’d run through the sand like a smiling greyhound to everyone’s squeals and delight. (Merry at our cherished Vagabond’s House Inn in Carmel.) For our last ride together, I made sure Merry was secure in her plush box and pushed the ignition button. The radio was on, but I was so focused on driving carefully down our driveway through tear-filled eyes with this precious cargo that I didn’t even hear the song. Until the singer sang these words:

“Down the lane, I walk with my sweet Mary.”

Sweet Mary? What the what? Was I hearing things? I stopped the car by one of our huge oak trees and green grass and looked at the dash. The radio was on the 60s station! The singer: Tom Jones. The song: “The Green Green Grass of Home.” You guys. You’re not going to believe the lyrics of this song (see the video below). It’s about being laid to rest. Under the oaks. In green, green grass. With “Mary” the angel of the song. I drove on in absolute disbelief and happiness, knowing she was telling me all was well and so much more.

I was suddenly so grateful for all of it. For life. And death. And the endless beautiful heartache of life and death.

And for fuddy-duddy fiancés and their old-timey songs. Especially those. (Tom Jones, thank you, brother.)

Watch Tom’s video here. May the miracle of sweet Merry remind you that you’re never alone. And that the great mystery of life is is so much more than we will ever see or know.

Little Fuzz, you’ll always be our forever girl. (With her pack of fur sisters and cousins, Valla and baby Ghost, who’d just jumped out of frame:)) 💕🐾 Linda
xx
P.S. THANK YOU for all of the messages, cards, photos, mugs, etc. (Here’s today’s FB post if you have any thoughts to share.) We’ve felt so comforted by every love note and memory. With the nearby fires in December (not knowing if we’d have to evacuate) followed by losing Merry, I’ve been slow to catch up and am taking precious care of myself and the fam. If I didn’t thank you personally, know that your kindness meant/means the world to me/us.