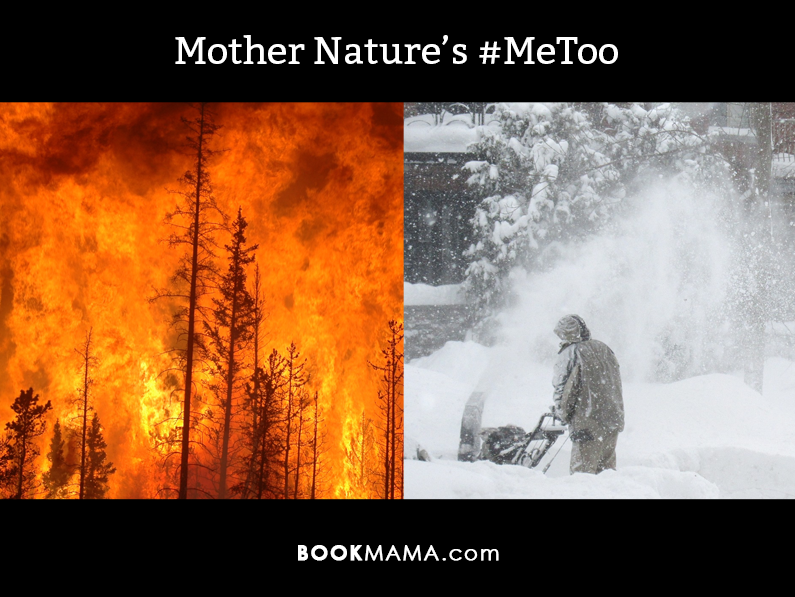 “There is no drought in California.” Donald Trump (June 2016)

This week’s rain, in the parched Golden State, was a blessing and a curse. For the first time in many months, millions of Californians—those not living in the path of murderous mud—could finally let their guard down. Stop looking out their kitchen or bathroom or bedroom windows to scan the horizon for smoke. Turn off their ringers, even at night, without a knot in their stomach they’d miss the life-saving call that could but doesn’t always come in time, warning they’ve got minutes to flee the flames.

This is our new normal. Living with fire and its lethal aftereffects. Again. Still. These days, it feels like always.

As the rest of the country froze, the rainfall was manna from heaven for the remaining firefighters still battling the Thomas Fire, our state’s largest recorded blaze. We hadn’t yet recovered from losing forty-four people and 10,000 homes in October in our Wine Country—as if it’s possible to fully recover—when December’s multiple fires stormed through. While the West burned, Global warming deniers ignored the news that 2017 was the hottest year ever recorded without an El Niño and pointed to the icy hurricane-force “bomb cyclones” to publicly joke about needing a little more of that good ‘ole warming.

Really? Because for those of us who’ve felt helpless and hopeless watching our trees wither and die from years of intense drought and little rainfall in the past eleven months, and who now live with the terror of being buried alive when the clouds darken—we don’t get the joke. I stand amidst mini mountains of gnarled branches on the ground that has yet to burn, next to cracked and jagged trunks broken at skewed angles, their roots exposed as if hoisted skyward by pulleys, and I wonder how anyone could deny what to me is dangerously obvious.

Let’s just say they’re right, though, the deniers. The drill-baby-drillers. Let’s pretend, for a minute or two, that the progressive media elite, tree-hugging hippie dippies screaming alarms of impending climate doom are spewing “fake news” after all. Aiming to hurt our economy with their talk of alternative fuels and Paris Agreement shame. Let’s agree that global warming is a bonafide conspiracy invented by China or Hillary or islanders looking for a free ride to our shores (and perhaps a protesting paycheck).

What if? Except. Then how do you explain my mother? Or, my childhood in the seventies, where Mom plastered our refrigerator door with enough stats, photos, articles, and political cartoons lampooning corporate greed at the expense of our “true mother” to give a kid a panic attack merely fetching the morning OJ.

According to Mom, we were living on borrowed time. She raised me on stories of falling water tables, rising sea levels, and climate disruption with refugees storming our shores like thirsty zombies in an apocalyptic movie. I worried she’d alienate the cool kids’ moms at PTA meetings, become branded as Chicken Little Crazy with sky-is-falling paranoia. Thankfully, Mom was lovable. And entertaining. Our neighbors in Los Altos, CA, craned their necks to watch her lug gray laundry water out to the yard in buckets to feed plants during peak drought years.

I was born a convert. But if my mother’s fears weren’t real, how come her dire predictions of temperature records, increased wildfires, and storm intensity was followed by real-world events as if she’d written the news herself? Fake news? Come again? Starting in 1970? That would have been one hell of a parlor trick. My mother was smart, but she was no magician.

What she was, was an avid reader. An informed citizen. A nerd who ran the offices of several Stanford University professors as their secretary and struggled to get her nose out of books. Just as she struggled not to run around screaming in panic for all the science she was learning.

Hers was an urgency passed on to me, though over the years, I dared to hope we’d all wake up before life got too Mad Max or Water Worldy. After all, Stewart Brand published the first Whole Earth Catalogue in 1968 and America was positively celebratory on the first Earth Day in 1970. The saying, “Reduce, Reuse, and Recycle” bordered on hip, and what elementary school kid wasn’t writing “How to Save the Earth” book reports?

In other words, progress! As CNN’s Van Jones pointed out in an interview Glennon Doyle and I did with him for his new book, as recently as 2008, John McCain was a climate champion. Newt Gingrich sat on a sofa with Nancy Pelosi and did an ad for climate solutions. A bipartisan consensus was built around climate disruption (only to be undone—as Jones explains—by Koch Industries and others who decided to “make it part of the culture war as opposed to part of the economic future of the country”).

Regardless, I never stopped lecturing/boring skeptics around me. (If you’re not emission obsessed every time you fire up your car or lament every Post It note you use—even recycled ones—count your lucky stars because it’s exhausting.)

But here’s a recent development I never expected. Lately, climate questioners in my life—the same people who ignored my prior rants/warnings—now watch the Weather Channel reports of first-ever back-to-back Category 5 hurricanes and record-breaking wildfires in California, Oregon, Wyoming, and British Columbia—and shake their heads. “Maybe it’s true, this global warming stuff,” they mutter. One just looked me and asked, “How did you know?”

How did I know? How did you not know?—I wanted to scream. Did you not hear me all those years? Did you not read those books and magazine articles I wrote and sent?

Then I remembered. She/he/they did not have my mother. They weren’t raised with the Refrigerator of DOOM. Theirs gleamed stainless steel, and their TV’s showed happier programming. Absent the perspective I’d been steeped in; I’d only sounded hysterical, fanatical. Until now.

A year before my mother passed, she passed the green baton to Thomas One Wolf, a Squamish Medicine Man I’d moved next door to in Northern New Mexico and who now became my green guardian. He taught me to decipher Mother Nature’s clues. My young son and I spent our days hunting for arrowheads and sparkly rocks and moose tracks; ours was a stunning life of campfires under the Milky Way, outdoor cookouts and sing-alongs, vision quests, and sweat lodges led by Thomas and his adopted father, Grampa Pete Concha, the spiritual leader of the Tiwa people from the nearby Taos Pueblo. But the forest around us was becoming crackle-pop dry. Locals told stories of snowpack as high as the rooftops only a decade before while we mostly experienced a dusting of inches.

“Why are so many animals gathering near the freeway?” I asked Thomas one day after a trip to town. I’d never seen so many deer, coyote, and rabbits in such proximity. “Fire is coming. They’re trying to save themselves,” he said. In what felt eerily similar to the stories my mother had told me, Thomas’s people had prophesied the changes we were witnessing around campfires for centuries. “Our Mother is angry,” he and Grampa concurred. When the fire came and went, all I could think about were those animals. I was grateful to have a friend who’d forewarned me.

Nowadays, we don’t need native seers to warn or convince us of the impending chaos a growing number see and feel. The clues are all around. The five-alarm infernos or weather bombs, take your pick, are here, and they’re raging.

Monster Mudslides. Rising Seas. Species extinction. Fire tornados. Ice hurricanes. Could it be any clearer? This is Mother Nature’s #MeToo.

This is Mother Nature’s #MeToo.

Our longstanding, ceaseless abuse of Her is making victims of us all, and yet too many of those with the power to do something refuse reality. Scott Pruitt certainly isn’t heeding mother nature’s call. As he attempts to kill Obama’s climate regulations, release the Clean Power Plan, and has restricted scientists from advising the EPA, the threat is far from fake. But this isn’t about politics or taking sides. This is about the planet we depend on to survive. The one thing we ALL agree on is that we love this earth. I only hope the halls of power will wake up to what she’s telling us, and quit bickering before our time is up.

PS. It’s Time to heed the call. Since too many of our leaders won’t, it’s now up to us. Agreed? I’d love to hear your thoughts over on FB.

PSS. Speaking of Time. It’s always on my mind. The Dalai Lama said the Western woman would heal the world, but I don’t see how, when the majority of us are caught in Time Debt. This disease of our era robs us of our energy, resources, and let’s face it, our world-saving effectiveness. In this TEDWomen talk, I share tips for healing time debt to ensure we spend our time wisely… doing what we came here to do.