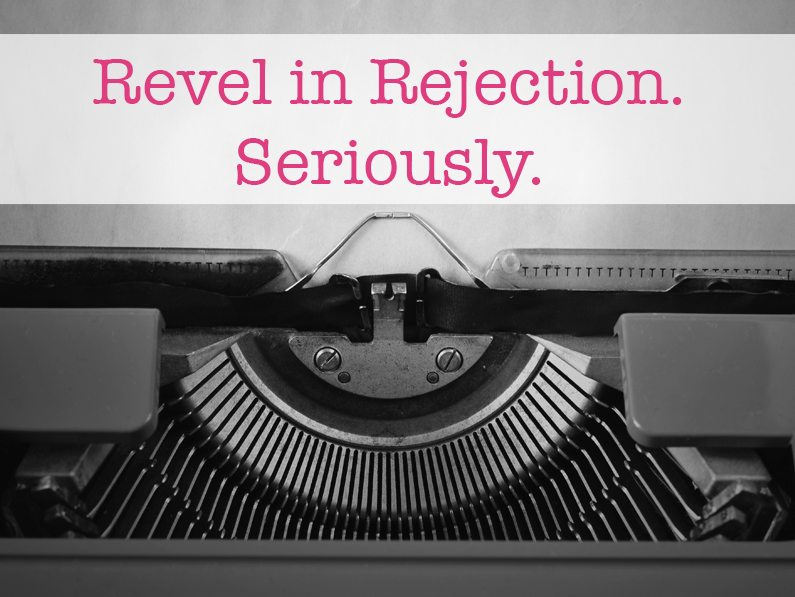 You may have heard me say this before: REJECTION letters—from literary agents, publishers, or gatekeepers at magazines, newspapers, and even blog sites—are a healthy part of the process of writing. Stabilizing, even. They prove you’re moving forward and thinking next level. The feedback they provide can give valuable insights + much-needed truths to help you better express yourself in future drafts.

That said, rejections can also be whacked out lame and effing WRONG. Provide vague nothingness or straight up bad advice, all of which can make you scream and cry and laugh like The Joker with a stick up his… Whoops! Back to my point.

Not everyone will get the value and marketability of you and your work.

When Danielle LaPorte and I were scripting our digital course, Your Big Beautiful Book Plan, we had the most fun working on the Rejection section. Not only did we revisit our past take-a-hike letters (that comically, no longer stung), but we also researched and included some of the best and biggest publishing rejection stories. Things that made us shake our heads and marvel at the heart-and-soul commitment of what would become jaw-droppingly successful authors. Talk about BELIEF that paid off.

I could practically SEE the cork board in thirteen-year-old Stephen King’s bedroom where for years he tacked up his rejection letters—knowing that with each No he was one step closer to his first Yes. Bad news would not extinguish the fire in his gut. Based on the 350+ million copies of his books sold (including 54 novels, 6 non-fiction books, and a novella that became the basis for the movie The Shawshank Redemption), the kid was right.

“By the time I was fourteen, the nail in my wall would no longer support the weight of the rejection slips impaled upon it. I replaced the nail with a spike and went on writing.” ~ Stephen King

In the rare (lol) instance you’ve ever felt rejected or will in the future, here’s what Danielle and I included in that section of YBBBP. I hope it makes you shake your head, marvel at their heart-and-soul commitments, and pick up your pen or keyboard.

Got rejected? You’re in good company.

1. George Orwell: One publisher rejected Animal Farm by declaring, “It is impossible to sell animal stories in the USA.” Time magazine went on to name the book one of the 100 best English-language novels of all time.

2. Jack Kerouac: One publisher had the following comments about On the Road: “Kerouac does have enormous talent of a very special kind. But this is not a well-made novel, nor a saleable one nor even, I think, a good one. His frenetic and scrambling prose perfectly expresses the feverish travels, geographically and mentally, of the Beat Generation. But is that enough? I don’t think so.” Sterling Lord, Kerouac’s literary agent, shopped the manuscript around for four years before finally securing a deal.

3. Ayn Rand: The Fountainhead was rejected 12 times, till an in-house editor threatened to leave the publisher unless it was pub’d.

4. J.K. Rowling: The manuscript for Harry Potter & the Philosopher’s Stone was rejected by 12 different publishers. All of whom probably feel very, very dumb about the whole thing.

5. Robert Pirsig: Zen and the Art of Motorcycle Maintenance was rejected 121 times. The publisher who finally approved the manuscript said, “It forced me to decide what I was in publishing for.”

7. Anne Frank: Her diary was rejected by Alfred A. Knopf Inc. in 1950, after one reader called it: “a dreary record of typical family bickering, petty annoyances and adolescent emotions” … and was then rejected by 15 other publishers–one of whom said, “The girl doesn’t, it seems to me, have a special perception or feeling which would lift that book above the ‘curiosity’ level.” –before Doubleday pub’d it in 1952.

8. Paulo Coehlo: The Alchemist sold around 800 copies in its first release and was dropped by its first publisher. It has now been translated into 60+ languages and has sold 75+ million copies… and is one of the best-selling books in history.

9. Oscar Wilde: Upon reading his play, Lady Windermere’s Fan, one publisher famously wrote back to Wilde with a rather polite, repressed NO: “My dear sir, I have read your manuscript. Oh, my dear sir.”

10. Stephanie Meyer: She sent out fifteen agent queries about her girl-who-falls-in-love-with-a-vampire saga. All but one of the agents either rejected or ignored her. One rejection arrived after she’d received a three-book deal from Little, Brown. We’re guessing this Twilight author no longer worries about queries.

Inspiring, right? Does this make you feel a little less freaked out by what the “gods” of the publishing world think? Want to care a little more about what YOU think?! My best advice is to focus on writing something YOU love, and chances are, your readers will too.

Thanks so much for revisiting this topic with me. Rejection never disappears, but it DOES get easier (and funnier) over the years as positive momentum builds and your world continues to expand.

Danielle and I have a lot more to share about the process of bookmaking and publishing (as do our friends) in Your Big Beautiful Book Plan. It’s helped land six-figure advances, attract top literary agents, and change lives. Maybe that’s your next step?

Have a blessed week, you reveler, you!

Linda
P.S. Got a crazy fun or crazymaking rejection story to share? Has YBBBP helped you gain more courage or clarity? As usual, I’d love to see you over on Facebook, to continue this conversation. xo